A new addition to Fez's Ta'laa Kbira has enhanced the creative vibe of the popular street. Anan Sorsutham and Philip Laleu's new boutique, Moi Anan, offers a unique style to visitors and locals

In 2014, Anan and Philippe founded the popular Maison Moi Anan Thai restaurant in the Fes Medina. "We used to have the clothing shop on the first floor of the restaurant, and then we decided to open here," says Philippe. "We chose this area because you have other (similar) shops - Christophe doing recycled stuff, and Salima, who is also a designer.  We thought it would be interesting to have several designers in the same area, to encourage this area to be a fashion place."

Moi Anan boutique is minimalist grey, like the restaurant. "Grey is a very cinematic colour," says Anan. "The background is grey, so the occasional colour pops out." 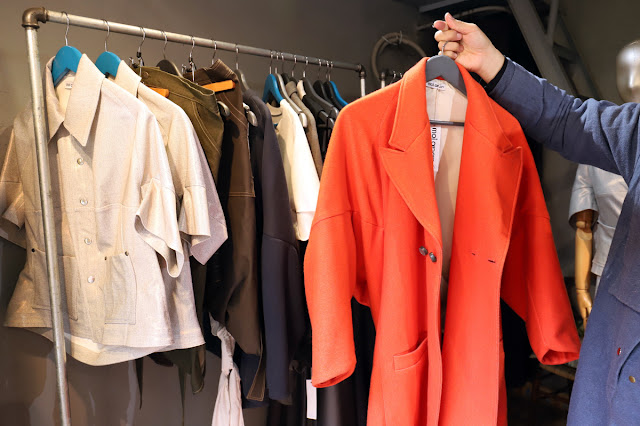 Anan has long been a fashion designer, with a particular flair for intricate tailoring. "Now we focus on Moroccan inspiration," he says. He particularly likes the way Moroccans drape themselves, "in a mysterious way...it's about volume; wrapping the whole body."

While Moroccan free-flowing forms and precise Thai tailoring would appear to the antithesis of each other, Anan manages to pull off the unusual combination. Many of his creations have fabric draped in specific sections, such as at the back, with space in the arms to move around, yet the rest of the garment hugs the body. "I pick and combine (elements of both cultures), and it (the result) belongs to me."

"I like King Mohamed V's way of thinking," explains Anan. "He travels to Europe, sees the architecture; sees the design. When he comes back, he wants to combine (the best) of other cultures, but still retain the Moroccan character."

When Anan was living in Bangkok, he had a factory producing his designs and worked on a much larger scale, up to a year ahead. Now he prefers to work on a smaller scale, befitting the artisan approach of his new home in the Fes Medina. His creations are limited to 3 - 5 pieces per design, with styling dependent on the fabrics he finds.

The Ramadan Heat is On - Morocco Expects Heatwave Forum on Islamic feminism in Fez
Comments
Order by:
Per page:
Post info