On the penultimate day of the Fes Festival, it has become something of a tradition to give the locals a treat with one of their favourites - the Arabo-Andalus Orchestra of Fes, directed by the renowned Mohammed Briouel. This year was no exception, but several other performances attracted visitors and gave superb performances - Venetia Menzies reports...

Under the direction of the master Ballaké Sissoko, a member of the National Orchestra of Mali since the age of 13, young musicians from Bamako gathered for an afternoon of Mandika music.


Ballaké’s musical talent was inherited and developed by his late father Djelimady Sissoko who was the founding director of the NOM. He specialises as a kora player, an instrument with a mysterious origin related to the Mandika tradition.

Mandika are an ethnic group spread across Mali, Mauritania, Sierra Leone, Liberia, Guinea, Ivory Coast, The Gambia, Senegal and Benin. Descendent of the Mali Empire, their musical tradition holds the kora as a mythical instrument. 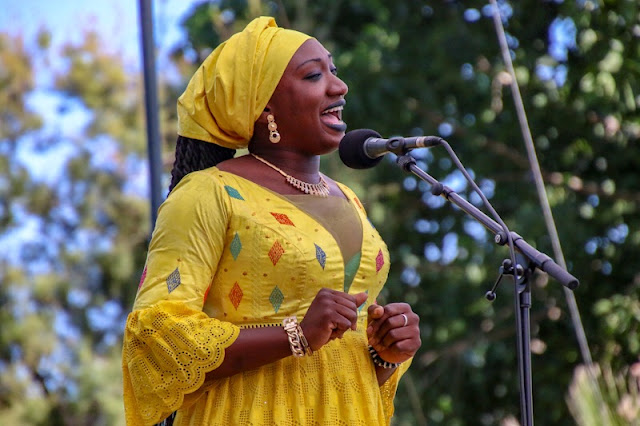 Tradition has it that it was first played by the supernatural spirits, the djinns. The Mali King Sundiata found a djinn playing it by a riverbed and ripped it from his hands, bringing it into the human world. A cross between a harp and a lute, the instrument is dynamic and rich, literally considered a portal to another world.

Balleké played the instrument as if second nature, helping it to live up to its reputation. After two enigmatic pieces, he left the stage. Five men dressed in shining hand-made Malian djellabiah replaced him, each with their own kora. They were different shapes and sizes, one so large it came with its own seat, and with holes in different places. 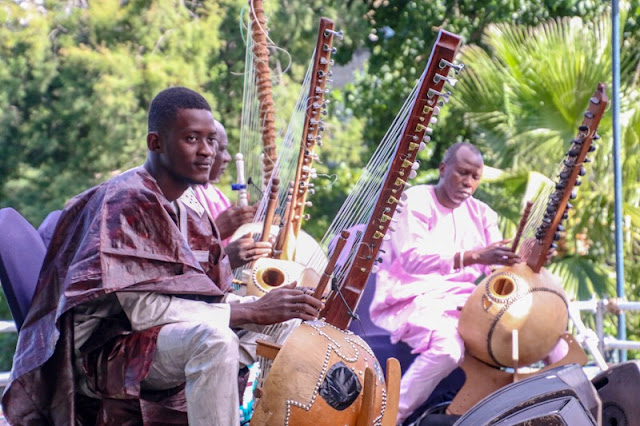 Never failing to surprise, three singers in colourful outfits entered injecting another level of joy onto the stage. Getting the audience involved with claps and cheers, they bobbed from side to side singing over the instruments. Turning to the musicians, one singer addressed them directly blessing their instruments and expertise.

Singing odes to the river and the bounties of nature, they gave us duets solos and harmonies to take us to neighbouring Mali. The eldest vocalist sang with such passion that if it wasn't for his beaming cheeky smile you'd think he was furious. 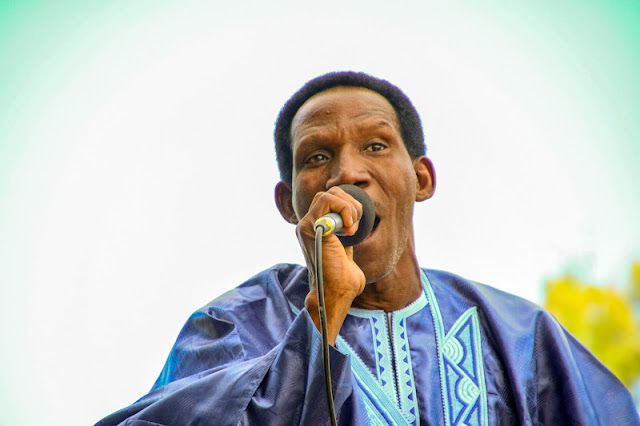 For the entire performance their director Bassaké had his eyes closed, sitting muted at the back focusing solely on his kora. With total trust in his fellow musicians, he let them slowly melt the audience into a dream.

“We walk, we walk, again and again we walk, towards the same beautiful sun”


Captain Alexandre, real name Marc Alexandre Oho Bambe, is a poet and slam artists. This evening in the medina he shared with the audience a flowing text that celebrated the human journey of being alive, with all its twists, turns and hard lessons. Spoken in French, even for those who couldn't understand, his message was translated in his embodiment of the emotions.

The setting of the performance was as evocative as the lyrics, a single spotlight shining on the slam artist aptly named Captain. With each word he personified the emotion of the song, his face expressing each sorrow, each hardship and each joy.

What was unexpected was the vocal skill and sound of his fellow performer Alain Larribet. With the ability to make noises that evade human origin, those of birds, animals and forms altogether unknown, he stunned the audience into silence.


Flitting between an Indian harmonium, flutes, percussion and using only his voice, he created a mood of reflection and awe. At the left of the slam artist was our and guitar player Christophe Isselée settings the undertone melodies of the pieces, keeping otherwise disparate components united.

An unmissable addition to the Festival, and for those lucky enough to find Dar Batha in the medina, a favourite.

The art of Muwashah from Aleppo to Fes

Literally meaning ‘to embroider’, muwashah, is a Semitic word that describes a poetic structure. With each word accentuated by the music, the structure is connected and yet free flowing. The rhythms often intensify in speed until you can feel ‘drunk’ under its spell. 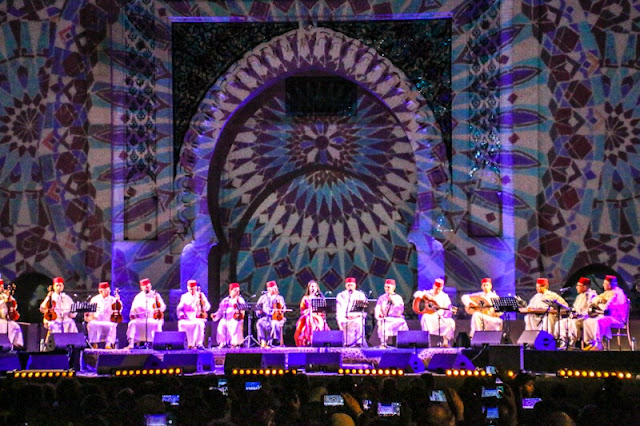 Tonight Bab Makina was packed out with mainly local Moroccans, waiting for an orchestra considered the most important and oldest of Moroccan Andalusian tradition: the Arabo-Andalus Orchestra of Fes, directed by the renowned Mohammed Briouel.

The Arab-Andalusian musical tradition was preserved by the efforts of such orchestras after the fall of Granada in 1492. Bringing together traditions from both sides of the Mediterranean, and the best of both rhythms. 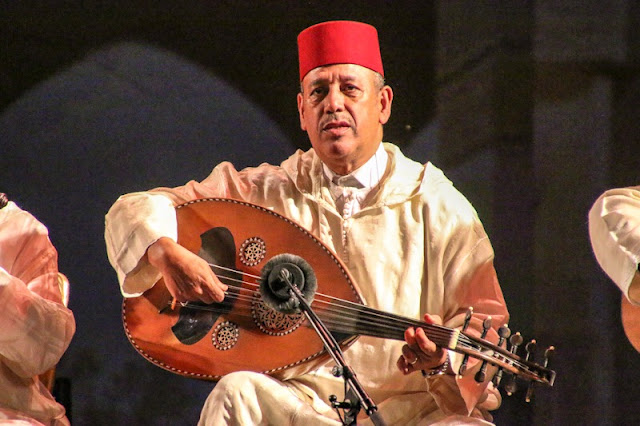 Another local hit, the audience knew exactly when to clap and sing in unison as if it were all rehearsed. It wasn't too long before there were foot taps that morphed into dancing. With catchy rhythms and the energy of the crowds, the enjoyment was infectious.

Switching between the vocals of the beautiful Nabyla Maan, Moroccan singer songwriter, and the blend of percussion, oud, cello and violin, they played the smash hit song “chams achya”:

“Oh sun of the evening,
I hope you do not go away with God,
I am all yours”


It didn't stop until the clapping was deafening and the strings of the violins began to split and spray. Hypnotic projections circled behind them, designed on patterns native to Fes that decorate the medina.

A sudden break was taken, and next up was the Syrian Orchestra of Paris, directed by lead violinist Khalil Jerro. Dressed in modern black tie, they entered with more the same instruments to show their flavour of Mushawah musical tradition.


Aleppo was at the heart of conserving and developing this tradition throughout the centuries. Omar Sarmini entered belatedly, a famous musician known for his ability to sing the sacred songs of Sheikh Muhammad Sarmini and sang alongside the orchestra.

A Fes Festival regular, the orchestra are a big hit every year. With a similar set, it is just how the audience like it: catchy, familiar and evocative of past traditions still alive today.

Tomorrow at the Festival