Following in the footsteps of the many Sufi musicians of the past, who had famously travelled to this ancient city to unearth its wisdom, the Fes Festival 2019 attracted an eclectic mix of artists from around the world.

This practise of migrating between centres of knowledge, sharing and exchanging ideas, is what helped cultures to infuse a variety of styles, genres and instruments into their traditional musical heritage. This interconnectedness and diversity of musical knowledge was evident across each stage of the festival, from the iconic Bab Makhina to the solace of Jardin Jnan Sbil.

Each member of the audience had their own personal favourite performer or musical genre, but there were some undebatable festival highlights. At the top of the list was the world-renowned Marcel Khalife, who was accompanied on stage by his son Rami, a master pianist, and also by most of the audience, who sang the lyrics to each and every one of his songs like they were trying out for ‘Morocco’s Got Talent’. Relaxed and confident, Khalife lived up to their expectations, delivering an even sweeter sound than that on his records and CDs.


Another spellbinding performance was from the Ballaké Orchestra, who, under the direction of Ballaké Sissoko, relied solely on vocals and the kora instrument of the Mandika tradition to captivate the audience. The unique sound and sight of the kora made this performance one to remember. The same could be said of the much-enjoyed Carlos Nunez with his Spanish Gaita Bagpipes. The novel experience of hearing such an instrument, especially played by a master such as Carlos, was memorable, and his talented violinist Mary Ryan added a raw energy and vigour to the mix that ensured the concert was a highlight.

A local favourite was Sami Yusuf, who performed new and old arrangements to a packed-out audience who repeated each line back to him. But nobody had the audience dancing and singing as much as the Gospel performers of this year’s festival. Firstly there was Michelle David and The Gospel Sessions, who, despite their late start, wowed the audience with their energy, openness and cheer. But with double the manpower, the Kingdom Choir of the U.K., who performed at the first section of the finalé, may have been this year’s ‘Festival First’. Within minutes, they had the entire venue on their feet, singing, clapping and swinging their hips from side to side.


Few vocalists in the festival could rival the singers of the Kingdom Choir, who sang as if the melody erupted from within. Contenders who matched them included Alain Larribet, the vocalist of Opera Slam Baroque, who could make sounds unknown to this world, and the Azerbaijani vocalist of the Baharriya ensemble, who used his voice like an instrument, dancing between notes and melodies acrobatically.

Despite the passion and soul of each performer who graced the stage this Fes Festival, there is considerable room for improvement when it comes to organisation and strategy of the festival itself. Recurring complaints from Fes Festival regulars were the same: poor time management, poor logistics, and the constant feeling of not really knowing what is going on. It came to be that there were actually two separate schedules for the concerts, one listing all the start times half an hour later than the other. This is a recipe for confusion and frustration, and an elementary error.

Another gripe comes to the planning of the schedule itself. For those who shelled out for a Festival pass and found themselves unable to attend each concert, there was considerable frustration. Why not schedule the concerts with half an hour between each, allowing the audience to make their way to the next venue? Currently the schedule dictates that many in the audience rush off early from one concert to arrive late and exhausted at the next.

Getting between the venues is also no mean feat. Even those who have lived in Fes medina since birth admit that the old city, with its thousands of small streets, is a labyrinth not to be underestimated. It would hugely improve the overall experience if there were clear signs, guides, or even better: a shuttle bus for those less able to hike up and down the hill.

The last piece of constructive criticism has been heard before: there is considerable need for the introductions and narration to be translated into English as well as French and Arabic. The majority of the Festival pass-holders are Anglophones, mostly from across Europe, America, Canada and Australia. Given the unrivalled linguistic skills of Moroccans, it would not be impossible to source a translator, and this is essential if the festival aims to be renowned internationally. Such organisational shortfalls fail to do justice to the performers who are bringing it their music year after year. 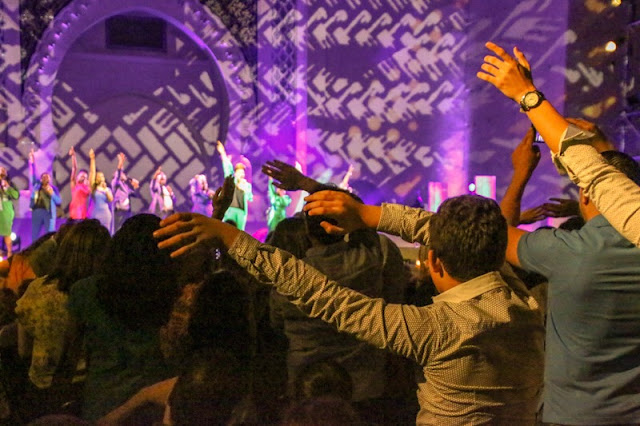 Regardless, the crowds will undoubtedly return next year, expecting an equally impressive line-up and probably a few logistical mix ups too. It is always a delight to hear performances from masters of sacred music from around the world, and to be at a festival that celebrates the diversity and importance of global musical heritage, and ultimately of all humanity. In current times of division, antagonism and fanaticism with regards to global geopolitics, it is refreshing to be immersed in such an environment where people from all faiths and nations can unite around a common love for music. 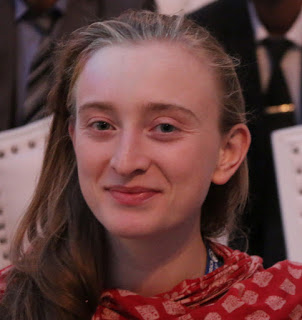 The View From Fez would like to thank Venetia Menzies for her magnificent solo effort in covering the festival.

Fes Festival Closing Concert - June 22 The Holidays are Over
Comments
Order by:
Per page:
Post info