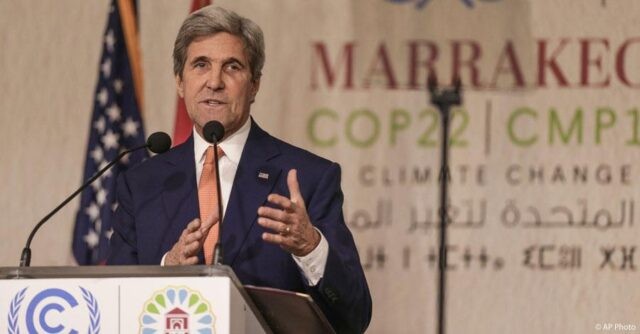 John Kerry, the US’ Special Presidential Envoy for Climate, has expressed satisfaction with Morocco’s approach against climate change.

In a tweet, Kelly announced that he held a phone call with Morocco’s Minister of Foreign Affairs.

He described Morocco as a “tremendous partner in the global fight on climate change.”

He also recalled Morocco’s commitment to the fight against climate change during COP22, the climate change-themed event which Morocco hosted in Marrakech in 2015.

“We’re eager to deepen our partnership on the #RoadtoGlasgow,” Kerry said.

Kerry is not the first high-ranking foreign official to commend Morocco’s approach against climate change.

The country’s renewable energy projects have consistently received international applause in recent months. Many observers often single out Morocco’s approach against climate change as a regional and global example.

Recently, observers raised eyebrows after the White House did not extend an invitation to Morocco to attend the virtual climate summit the US will host on April 22-23.

Excluding Morocco, which is among the world’s leaders in the fight against climate change, representatives from 40 countries will take part in the event.

Meanwhile, the discussion between Kerry and Bourita comes both as an acknowledgment of Morocco’s “tremendous” efforts on the climate front, and a reassurance that the US values its climate cooperation with Morocco.

The country also launched the Green Plan in 2008. The plan aims to position agriculture as the Moroccan economy’s main growth driver over the next ten to fifteen years.

The country’s efforts have been cited in several world-renowned reports.

The CCPI commended Morocco for its ambitious 2030 targets and called the North African country a “frontrunner in this regard.”