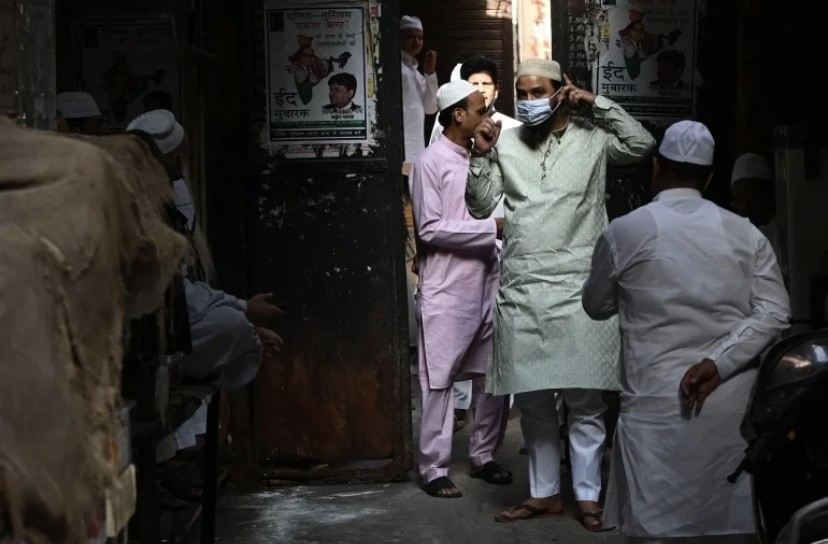 Shown their place’: Muslim livelihoods under attack in India

New Delhi, India – Not everyone in India is excited about the upcoming festive season in October and November.

For Afzal, a mutton seller in Greater Noida – a suburb in Uttar Pradesh state neighbouring capital New Delhi – who did not wish to give his real name for fear of reprisal, it would mean a loss of business for nearly 10 days.

“The Bajrang Dal [Hindu far-right group] in this area distributed pamphlets ordering the closure of shops during the festival period. They have become very active ever since Yogi Adityanath came to power,” he told Al Jazeera, referring to the saffron-robed Uttar Pradesh chief minister, who belongs to Prime Minister Narendra Modi’s Bharatiya Janata Party (BJP).

“We have nowhere to complain. The police and the municipality officials side with such groups,” adds Afzal, with some trepidation.

Afzal has been fortunate: though he has been targeted, he has not faced any physical violence. Many others have not been so lucky.

On September 23, two Muslim men in Mathura, a temple town in Uttar Pradesh, were badly beaten up for carrying meat. Earlier this month, the government decided to make a large part of the city alcohol- and meat-free.

About a month ago, in Indore city of Madhya Pradesh state, also governed by the BJP, a Muslim bangle-seller, Tasleem Ali, was beaten up because he was selling his wares in a “Hindu locality” allegedly under an assumed Hindu name.

Within a week or so, in Ujjain city in the same state, a Muslim scrap dealer was forced to shout “Jai Shri Ram” (Victory be to Lord Ram), a war cry used by Hindu supremacist groups.

Similar incidents were reported in Uttar Pradesh as well in the same month.

The owner of a horse carriage in Lucknow was forced to chant “Death to Pakistan” on the basis of a fake claim that he had hoisted a Pakistani flag on his carriage.

Then again, in Mathura, a Muslim eatery owner was forced to change its name from “Shrinath Dosa” to “American Dosa Corner” because right-wing groups objected to him using the name of a Hindu god.

All these incidents were recorded in a series of disturbing videos that went viral. The common thread in the videos is that they showcase Muslim vendors and small traders being assaulted because of their religious identity.

Also, the assaulters in all such cases are alleged members of Hindu right-wing groups, who feel emboldened under Modi’s government and exercise significant impunity.

Such incidents are being seen as part of a larger attack on the livelihoods of Muslims, many of whom are self-employed or are engaged in low-paying jobs.

Nearly 46 percent of Muslims are self-employed in urban India, the largest as compared with any other community, according to data from the government’s National Sample Survey Organisation (NSSO), 2013.

The report adds that Muslims are the poorest among all religious groups in India and are concentrated in low-paying jobs in the informal sector.

Jeremy Seabrook and Imran Ahmed Siddiqui, in their book People Without History: India’s Muslim Ghettos, have documented a gradual “de-skilling of Muslim workforce” due to globalisation, which has forced them into low-paying jobs.

If these frequent incidents of attacks on Muslim livelihoods are seen “in consonance with some policy measures which the BJP government has taken in different states in the last few years, then it is a worrying trend indeed,” Abdul Waheed, professor of sociology at the Aligarh Muslim University in Uttar Pradesh, told Al Jazeera.

In 2017, when the BJP government came to power in the northern state, one of its first moves was to shut down slaughterhouses and meat shops. The ostensible reason was that such places were not following legal regulations.

However, till date, no related regulation has been enacted. “The absence of any regulation in this regard makes it clear that the intention behind such a move was to destabilise Muslim businesses,” Manoj Singh, journalist and researcher in Uttar Pradesh’s Gorakhpur city, who has been tracking the rise of the BJP in the state, told Al Jazeera.

In March this year, the city council in Gurugram in Haryana state – also governed by the BJP – decided to close all meat shops and ban all restaurants from serving non-vegetarian food on Tuesdays to respect “Hindu sentiments”.

Such measures are likely to affect Muslims adversely. “This is a clear attack on Muslim livelihoods since, traditionally, it is primarily Muslims who are engaged in the meat and poultry business in India,” says Waheed.

Singh argues that such incidents belie the Uttar Pradesh government’s claim that it is interested in the development of all. “We do not see members of such vigilante groups arrested which only means that they have the tacit support of the government.”

“The state government is popular even among Muslims because of its various schemes. A narrative is being built by vested interests that the government is anti-Muslim which is not true,” Tripathy told Al Jazeera.

“Some of these videos and incidents have turned out to be fake. Others are being probed; therefore, it will be premature to comment on them. Let me assure you that no one is above the law in the state.”

It appears that such attacks are happening due to an ideological motivation to hit Muslims economically by driving them out of their professions, so that they are forced to convert eventually.

In January 2021, at a Hindu panchayat (mass gathering) in Uttar Pradesh’s Meerut, anti-Muslim preacher Swami Anand Swaroop said the Hindus “should decide that they will not buy anything from Muslims”.

“If you destroy them socially, politically and economically, they will begin converting to Hinduism from Islam,” he told a crowd of hundreds.

It is well-documented that Muslim properties have been targeted during various communal riots in India. But focused attacks on small traders and hawkers seem to be a new trend.

As the COVID-19 pandemic broke out in India last year, Muslim fruit-sellers were targeted and scapegoated for allegedly spreading the virus. Posters were put up in several villages announcing that Muslim vendors were not welcome in those areas.

Journalist Singh links the current spate of attacks against Muslims to the upcoming state assembly elections in Uttar Pradesh, in which the BJP is seeking to retain power.

“The BJP government has been speaking against Muslims since it came to power, but just speaking against them is not enough to win the hearts of their Hindu supporters in the politically charged state,” he said.

“The Muslim community has to be brought to its knees by economically marginalising them even further. This is being done in order to send a signal to the Hindu electorate that Muslims are being shown their place.”