More data is needed to ensure hard-hit communities of colour are not left behind in vaccine drive, health experts say. When the first cases of COVID-19 were reported in the United States last year, public health officials and community experts warned that Black and other people of colour would be disproportionately hard hit.

Their warning was quickly proven true, with Black, Hispanic and other racialised communities bearing the brunt of infections, deaths and hospitalisations linked to the coronavirus in the year since it began spreading across the country.

Now, many of those experts say a dearth of data on race related to the administration of COVID-19 vaccines risks leaving those same communities behind – or worse, furthering the damage the virus continues to wreak.

“We need to make sure that the communities who need it most – that have suffered the most – have priority to getting the vaccine,” said Dr Uche Blackstock, founder of Advancing Health Equity, an advocacy group, and Yahoo News medical contributor based in New York City.

“We need to know not just racial and ethnic demographic data, but also zip codes of the people being vaccinated – there needs to be a real-time dashboard. Are we targeting the communities that really need this vaccine? And if not, if people from the neighbourhood are not coming, we need to identify why this is happening,” she told Al Jazeera.

More than 464,000 coronavirus-related deaths have been reported across the US to date – the highest total in the world by far – while more than 27 million cases have also been recorded, about one-quarter of the global total, according to the Johns Hopkins University.

The country’s distribution of COVID-19 vaccines – from Pfizer-BioNTech and Moderna – began in December under the administration of former President Donald Trump, whose lax and often derisive approach to the pandemic has been blamed for the virus’s uncontrolled spread.

But the process has been plagued by delays and inefficacies.

The Trump administration largely left it up to state governments to decide which citizens would be first to be inoculated, as well as where and how the vaccines could be administered. Several US states have complained about not knowing how many doses they would be receiving from the federal government, making it harder to plan distribution. Most have given first priority to healthcare workers and residents of long-term care homes.

As of February 8, more than 59.3 million vaccine doses had been distributed across the US and 42.4 million had been administered, according to data from the US Centers for Disease Control and Prevention (CDC). Of that, about 9.5 million people had received two doses of the vaccines. 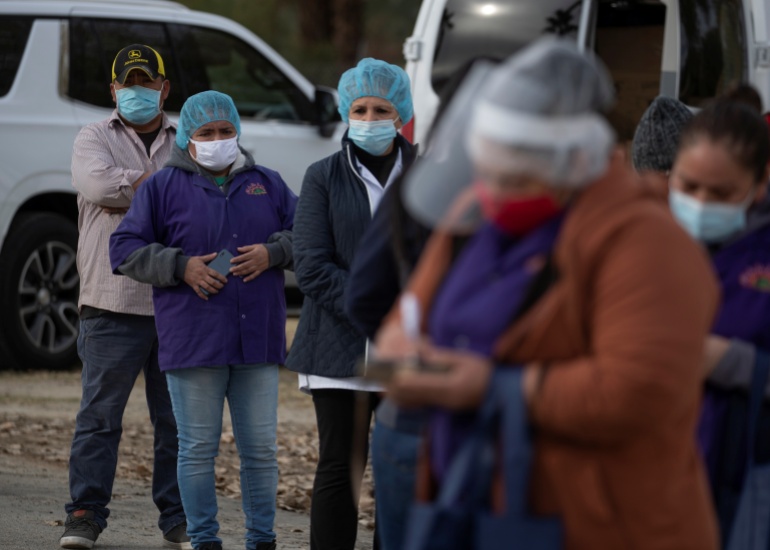 Information is limited on who is receiving the shots, however, and that poses a problem to ensuring the most vulnerable and at-risk people are being protected, said Nina Schwalbe, a professor at Columbia University’s Mailman School of Public Health.

“If you want to reach vulnerable populations, and you want to understand who is most vulnerable, it’s a requirement that the government collect data on – at a minimum – age, sex and race,” Schwalbe told Al Jazeera.

In a report released on February 1, the CDC said race and ethnic data was available for just more than half – 51.9 percent – of people vaccinated in the US between December 14 and January 14. Of that, 60.4 percent of vaccine recipients were white and 39.6 percent were racialised or ethnic minorities, including 11.5 percent who were Hispanic and 5.4 percent who were Black.

As Black, Hispanic, Asian and Indigenous people in the US “have more severe outcomes from COVID-19 than persons who are White, careful monitoring of vaccination by race/ethnicity is critical”, the agency said.

Despite these disparities, the Kaiser Family Foundation (KFF), a non-profit group that conducts research on health issues in the US, reported that as of January 19, only 17 states were reporting race and ethnic data related to vaccinations. As of February 1, that number increased to 24 states.

People of colour also are not getting vaccinations in proportion to their share of the population in some states, the report found. For instance, in North Carolina, white people accounted for 82 percent of those vaccinated to date, compared with just 10 percent who are Black. Black people make up 31 percent of the state population, according to 2019 US Census figures.

“To date, vaccination patterns by race and ethnicity appear to be at odds with who the virus has affected the most,” the KFF researchers found.

Black communities and other communities of colour in the US have expressed some concerns around the safety of COVID-19 vaccine. Local leaders say that hesitancy is fuelled in part by decades of institutional discrimination in healthcare and other public services.

That can be playing a role in the vaccine disparities, experts said, as are accessibility issues; many elderly individuals in the US have had trouble booking appointments online or by phone, and have been discouraged by complicated processes or wait times. Human Rights Watch says 25 percent of Black, 21 percent of Latinx, and 28 percent of Native American people above 65 years do not have internet access, hampering efforts to make appointments online.

Both Blackstock and Schwalbe said race data – and in particular, knowing who is not being vaccinated – can help with outreach and public awareness efforts, which are critical to boosting distribution to communities in need as vaccinations ramp up.

“As more people become eligible and received COVID-19 vaccine, public health officials should ensure that vaccine is administered efficiently and equitably within each successive vaccine priority category, especially to those at highest risk for infection and severe health outcomes, many of whom are Black, American Indian/Alaska Native, and Hispanic,” CDC spokeswoman Kristen Nordlund told Al Jazeera in an email.

But Nordlund said the CDC is not a regulatory agency and therefore it cannot mandate states collect the information. The US Department of Health and Human Services did not respond to repeated requests for comment, instead referring Al Jazeera back to the CDC.

“The ultimate distributor of the vaccines is the federal government. Whoever holds the goods makes the rules,” Schwalbe said.

While the early disparities continue to draw criticism, authorities at the local, state and federal levels are trying to do more to reach vulnerable groups as President Joe Biden’s administration ramps up vaccine distribution.

At the state level, authorities in New Mexico are looking at using drive-through testing sites to reach underserved groups, while Massachusetts plans to offer vaccines through community health centres to reach people of colour, the LGBTQ community and non-US born communities, according to a report by the National Governors Association and Duke University’s Margolis Center for Public Health.

In New York City, a local healthcare network put new rules in place last month after local media reported that many people who live outside the city had booked appointments to receive jabs in Washington Heights, a neighbourhood where nearly 70 percent of residents are Hispanic.

The NewYork-Presbyterian healthcare network said all appointments at the Armory site would go to New York City residents, while 60 percent will be earmarked for residents of the neighbourhoods of Washington Heights, Inwood, Northern and Central Harlem, and South Bronx specifically.

“The Armory site was selected specifically to allow easier access to the vaccine to these communities, and a dedicated outreach team that includes bilingual staff has been created to expand community outreach efforts in Northern Manhattan,” it said.

Schwalbe said the federal government, which is distributing the vaccines, should make collecting race data a requirement for sites to receive doses. Most jurisdictions already collect basic information on anyone receiving a jab, she added, which means the question is, why is that data not being reported up and made public?

The problem mirrors that of data around coronavirus-related deaths: while the overall number of deaths is reported and accessible, more specific breakdowns of who is dying and where it is difficult to find, Schwalbe said.

“We need laser focus on reaching those people who are at highest risk, and those are the elderly and Black and brown populations,” she said. “Data should be available on every person receiving a vaccine. This is not rocket science.”