‘Havertz has arrived’: Chelsea fans salute German as he stars in win over top-four rivals Everton to keep Tuchel unbeaten

Kai Havertz gave Chelsea fans a long-awaited glimpse of the player they thought they were signing when he arrived at Stamford Bridge as the German playmaker pulled the strings in a 2-0 win over Everton in the Premier League.

Havertz, 21, was instrumental in both goals on Monday night, forcing Everton’s Ben Godfrey into an own-goal in the first half before winning a second-half penalty which was converted by Italian metronome Jorginho.

The victory – which kept the Blues unbeaten in 11 games in all competitions under new manager Thomas Tuchel – solidified Chelsea’s hold on fourth spot in the Premier League table as they moved four points clear of Everton in fifth and three points behind Leicester in third.

Monday’s victory was testament to the impact Tuchel has had all across the pitch since assuming command from the sacked Frank Lampard at the end of January.

That was no more so than with Havertz, the big-money summer arrival at the Bridge who has thus far faced a stuttering start to life in England, albeit one partly hindered by the lingering effects a Covid infection.

Returning to the starting 11 alongside countryman Timo Werner, Havertz was the spark for this victory as he arrived to turn a Marcos Alonso cross onto Godfrey and into the Everton net to break the deadlock on 31 minutes. 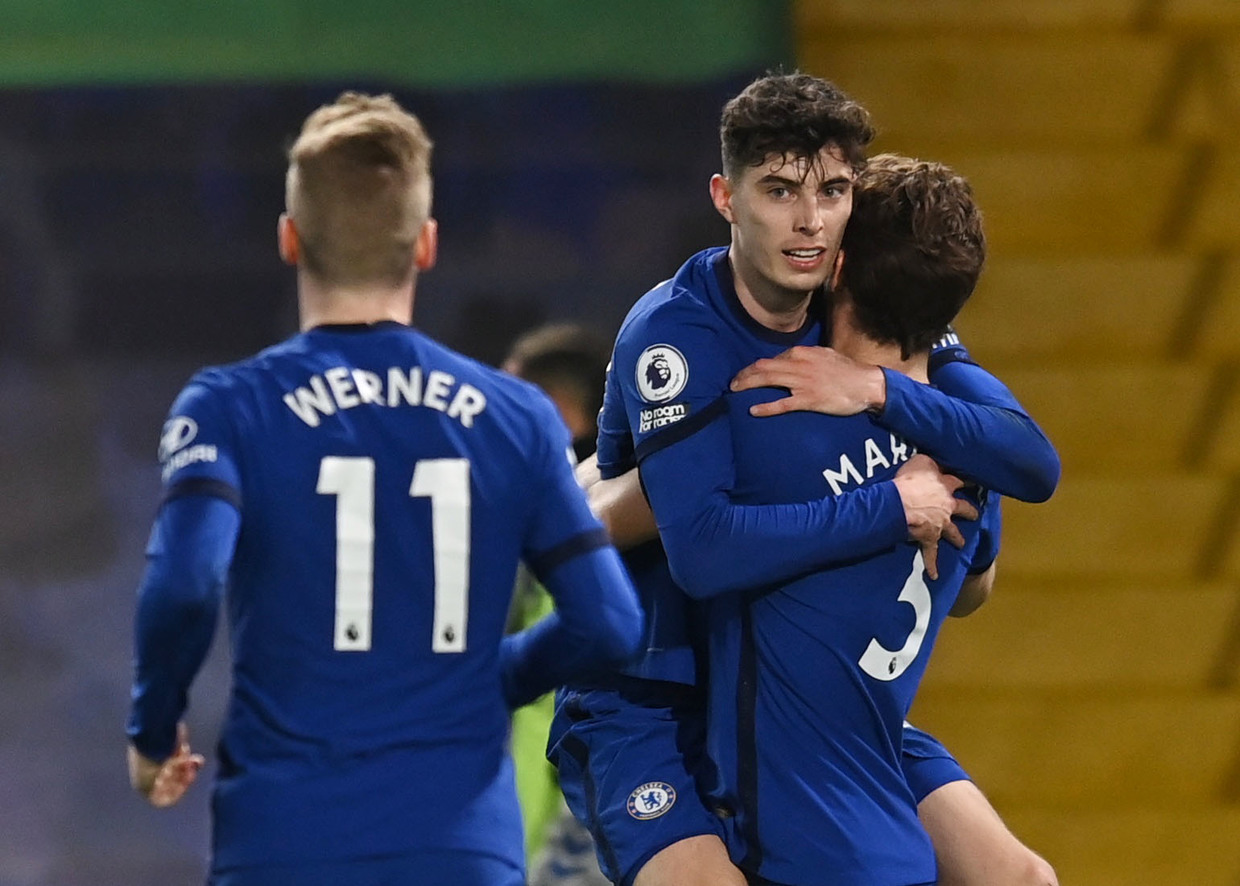 Havertz continued what many will be hoping was a breakthrough performance in a Chelsea shirt as he helped secure his team’s second of the evening just after the hour mark, racing through to touch the ball past Everton ‘keeper Jordan Pickford, whose sliding momentum brought him down.

Jorginho converted the penalty to maintain his perfect record from the spot this season, while Chelsea went on to comfortably secure the win their dominance deserved against Carlo Ancelotti’s Champions League-chasing side.

100% - Only James Milner in 2016-17 (7/7) has scored more goals in a single Premier League season with all of them coming from the penalty spot than Jorginho this term (6/6). Specialists. #CHEEVEpic.twitter.com/B40mdNrsLc

For many, the performance gave hope for bigger and better things to come from Havertz in particular, who persuaded owner Roman Abramovich to part with around £75 million at the start of the season to bring him to West London.

This is comfortably @kaihavertz29’s best game in a @ChelseaFC shirt. A glimpse of the obvious abundance of talent he possesses.

Kai Havertz 100% man of the match for me man what a performance in his first start in a while.

Those who didn’t give up on Havertz know that these performances are regular when he’s on formDon’t forget his talent 💫 pic.twitter.com/OVdO1XvIC4

Havertz was not the only one to impress, however, with Alonso again showing his threat down the left, and serving as a symbol of Chelsea’s revival under Tuchel, having been brought back in from the cold after being frozen out by Lampard.

Danish centre-half Andreas Christensen was another impressive performer, again a sign of the confidence instilled by the German specialist now occupying the Chelsea dugout.

Christensen is the perfect modern day CB when he’s confident he’s one of the best CB’s itl just like John Stones. He’s the player I’ve been most impressed with since Tuchel came in tbh

I love how Tuchel uses the squad.

I love how Thomas Tuchel is creating a 20-man Blue army that will basically fight for Chelsea every single week.Similar to Pep's methods in that sense, it doesn't matter who plays each week; they all know their jobs!

For Tuchel it was his own slice of history as he became the first manager in Premier League history to guide his team to a clean sheet in each of his first five home games in the competition.

5 - Chelsea boss Thomas Tuchel has become the first manager in Premier League history to see his side keep a clean sheet in each of his first five home games in charge in the competition. Solid. #CHEEVEpic.twitter.com/0YjAnP0Xya

Next up for Chelsea is a trip to Leeds on Saturday, before they face the second leg of their Champions League last-16 tie against Atletico Madrid, holding a slender 1-0 lead from the first meeting.