An elite-led ‘Great Reset’ post-Covid? No, what we need first is to get rid of the globalist approach that got us into this mess 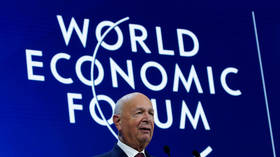 Founder of World Economic Forum Klaus Schwab speaks during a session at the 50th annual meeting in Davos, Switzerland. © Reuters
The WEF’s vision for the future isn’t a conspiracy, but a disingenuous, dishonest manifesto from an unelected ruling class. The virus has vindicated the national state and the need for ordinary people to be part of the solutions.

This week, the “Great Reset” has been trending on social media. For those not obsessed with such forums, the “Great Reset’ is the title of a manifesto for worldwide social change in the post-Covid world, written by Klaus Schwab, the founder and director of the World Economic Forum (WEF).

The “Great Reset” is an important manifesto. It articulates a vision of how the global elite see the future, and in particular, how they are seizing the opportunity presented by the Covid-19 pandemic – a world that will, apparently, “never” return to normal – to remake society in their image. It’s an idea that’s been seized on by ‘progressive’ politicians and leaders everywhere, from Canada’s Justin Trudeau to Britain’s Prince Charles.

On the surface, this might appear reasonable. After all, the challenges of the post-Covid world are certainly going to be huge. The economic fallout of the global lockdown, never mind the social consequences of mass unemployment and global poverty, will be unprecedented in world history.

However, the “Great Reset” is sophistry and dishonesty on an unprecedented level. Who is responsible, it may be asked, for creating yesterday’s problematic ‘normal’ to which we will supposedly never return?

Of course, these difficulties have nothing to do with the billionaires, political leaders, captains of industry and top regulators who swan around Davos each year, pontificating over oysters and champagne about the world’s problems, from which they benefit most.

And the idea of a ‘reset’ is at best disingenuous. This implies that the global economy and society was basically functioning OK before Covid-19. That it simply requires a reboot, like switching a computer off and on again.

This glosses over the reality, which is this: that the world economy and global society were in a sickly state before Covid-19, and now, being even more dependent on unprecedented state bailouts, which will take generations to repay, are in a still more parlous state. ‘Reset’ seriously underestimates the scale of the economic wreckage we face, the overhaul required, and the real barriers to the future.

The “Great Reset” vision from the WEF, presented as eight projections for 2030, reveals how disconnected these people are from reality.

Albert Einstein once quipped that “No problem can be solved from the same level of consciousness that created it”. The ‘build back better’ notion at the heart of the “Great Reset” – indeed, all government visions today – is a doomed project for this reason.