Rabat - Moroccan cuisine was on full display during the 2022 Spring Meetings of the International Monetary Fund (IMF) and the World Bank Group (WBG).

The Rahal Group, an integrated catering firm that has promoted Moroccan cuisine for decades, introduced international economic and political figures in Washington to Moroccan culture, through an authentic culinary experience.

The gastronomic showcase experience was held as part of the Moroccan economic ministry’s plan to promote Morocco as the host country for the IMF-World Bank annual meeting scheduled for October 2023.

Morocco was officially designated in April 2018 to host the 2022 annual meeting after a lengthy process of evaluating nominations from 13 countries.

However, the IMF and the World Bank decided to postpone it due to concerns over the COVID-19 pandemic.

Instead, the event will take place this year in Washington DC in October.

For the current spring meeting, over 250 guests got to experience breakfast in the Moroccan way as Rahal served them with a large choice of food, ranging from harsha and mlawi to amlou, olive oil, and argan, among other sweet and savory dishes that adorn the Moroccan tables. 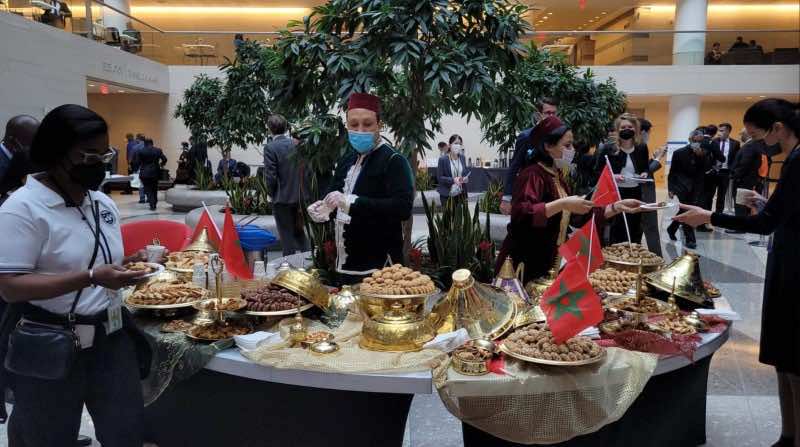 Attendees additionally got to savor a diverse buffet for lunch, featuring couscous, tajines, mechouis (grilled meat), and pastillas made by caterer Mohamed Rahal.

"We are proud to be able to promote not only the Moroccan culinary art but also Morocco's ability to host large-scale events with high international attendance," Rahal said in a statement to Morocco’s state news agency MAP.

He added he was particularly pleased to see his group represent Moroccan culinary art in the US and elsewhere.

The IMF-World Bank spring meeting is held from April 18 to 24, in Washington DC with the participation of several representatives of the member states of the two institutions, the private sector, and NGOs.