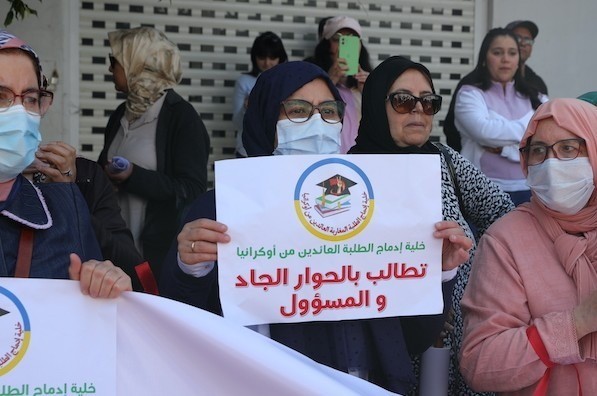 Rabat - The Moroccan students returning from Ukraine have opposed the government's decision to integrate them into private institutions. The reaction comes days after Morocco’s government announced it will issue tests to medical students who fled Ukraine to determine their university placement within private faculties.

The Coordination of Moroccan Students in Ukraine and the Integration Cell for Moroccan Students Returning from Ukraine issued a press release criticizing the government’s decision, saying that the suggested solution does not take into consideration the students' requests, which were proposed to the Ministry of Education.

According to the statement, the ministry’s decision to integrate the concerned students into private faculties only is an “unexpectable solution.”
The statement argued that the solution “contradicts with what the Ministry of Higher Education previously stated,” saying that the ministry initially “promised to integrate these students into public faculties, following the principles of solidarity that the institution encourages.”

It noted that the number of public faculties in Morocco largely exceeds the number of private institutions, arguing that public schools can easily host Moroccan students who returned from Ukraine. Most Moroccan university students in Ukraine were majoring in medicine (835 students), pharmacy (654 students), and dentistry (682 students), the statement detailed.

Moroccan public faculties welcome foreign students each year, it added, saying that those faculties “must give priority to Moroccan students who are forcibly returning from Ukraine as an exceptional circumstance.”

Arguing that the government’s decision promotes “the principle of elitism,” the statement highlighted the “extremely expensive” fees the students have to pay in order to study in private schools, which most cannot afford.

It went on to highlight Morocco’s need for more doctors in the health sector, arguing that  “it is necessary for these students [who returned from Ukraine] to benefit from the 20% share that was added this year.”

Last month, the head of Morocco’s government Aziz Akhannouch signed an agreement with the aim of boosting the number of health professionals by 2030.

The statement also denounced the ministry’s “procrastination and marginalization” of Moroccan students who are majoring in architecture, veterinary medicine, and other fields.

Russia’s invasion of Ukraine forced thousands of Moroccan students who were pursuing their academic studies in the Eastern European country to return to Morocco.