Casablanca - Morocco and Jordan have expressed their common perspectives on the Palestinian cause and questions of territorial integrity in the Arab world, with Jordan reiterating its support for Morocco’s stance on the Western Sahara dispute.

Meeting with his Moroccan counterpart in Amman Nasser Bourita on September 5, on the eve of the Arab League Ministerial Council in Cairo, Jordan’s chief diplomat Ayman Safadi reiterated his country’s unwavering support for Morocco’s territorial integrity.

Discussions between the two officials also revolved around the need to resolve the Western Sahara dispute on the basis of the Moroccan Autonomy Plan.

As well as supporting Morocco’s territorial integrity and sovereignty over its southern provinces, the top Jordanian diplomat stressed that Jordan and the North African country hold similar perspectives on the Palestinian cause.

“We agree that this is the central issue and that the only solution to achieve a just and comprehensive peace will be through the two-state solution that embodies the independent and sovereign Palestinian state with Al-Quds occupied as its capital within the borders of June 4, 1967, to live in security and peace alongside Israel,” the Jordanian Foreign Minister said.

He added, “We discussed the efforts we will continue to make to resume serious and effective negotiations that will lead us to progress toward a fair peace on the basis of the two-state solution.” 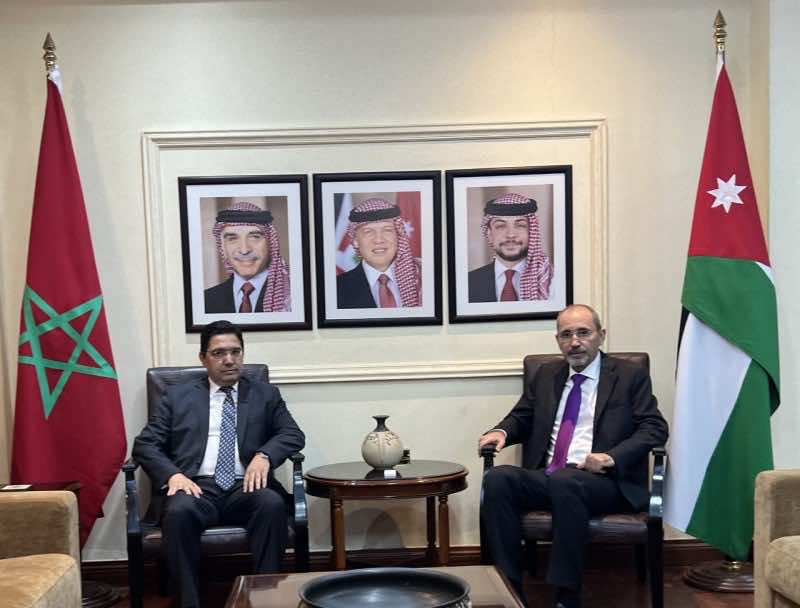 For his part, Bourita said that the two countries are working together to support the Palestinian cause and also preserve the Arab and Islamic identity of Al-Quds or Jerusalem.

According to the top Moroccan diplomat, these shared positions are based on Arab references to the June 1967 two-state solution proposal and the establishment of an independent Palestinian state on the borders of East Al-Quds as its capital.

The two top diplomats concluded their meeting with a joint call to both cement bilateral relations and work in close collaboration to promote Arab solidarity.

Regarding bilateral relations, they expressed their common desire to start planning for the joint Morocco-Jordan High Committee -- which was first held in Morocco in 2016 -- to meet in Amman as soon as possible. They also spoke of increasing visa issuances in both directions.

At the regional level, meanwhile, Bourita and Safadi underscored the need to activate joint Arab action in support of shared issues or priorities, foremost among which is support for the Palestinian cause.