Myanmar’s military has taken power and declared a state of emergency after detaining civilian leader Aung San Suu Kyi and other senior government officials in a series of early morning raids that followed days of escalating tension over the outcome of the November election, which the ruling party won by a landslide.

A video address broadcast on military-owned television said power had been handed to the commander-in-chief of the armed forces, Senior General Min Aung Hlaing. The emergency will remain in force for a year, it said.

Myo Nyunt, the spokesman for the governing National League for Democracy (NLD) said earlier on Monday, that Aung San Suu Kyi, President Win Myint and other leaders had been “taken” in the early hours of the morning.

Later on Monday, the NLD said Aung San Suu Kyi called on the public not to accept the coup and to protest.

“The actions of the military are actions to put the country back under a dictatorship,” the NLD said in a statement which carried leader Aung San Suu Kyi’s name. “I urge people not to accept this, to respond and wholeheartedly to protest against the coup by the military.”

Myanmar’s Parliament, where the military is given a quarter of seats and wields more power through its proxy Union Solidarity and Development Party (USDP), was due to open in the country’s capital Naypyidaw from Monday. 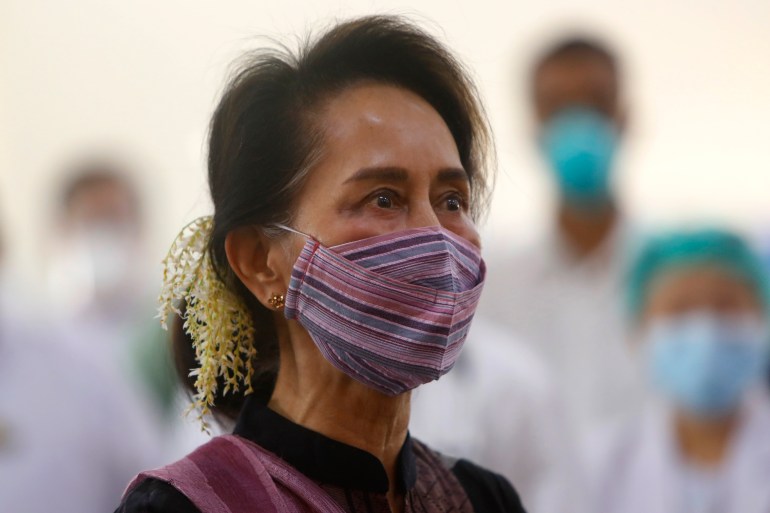 Politicians from states and regions, as well as prominent political activists were also detained, while mobile and phone networks were seeing disruption. State media was also taken off-air.

UN Secretary-General Antonio Guterres said the developments were a “serious blow to democratic reforms” and urged all leaders to refrain from violence and respect human rights, a UN spokesman said.

“We call on Burmese military leaders to release all government officials and civil society leaders and respect the will of the people of Burma as expressed in democratic elections on November 8,” US Secretary of State Antony Blinken said in a statement.

Australia said it was “deeply concerned” at the situation, as did India.

“India has always been steadfast in its support to the process of democratic transition in Myanmar,” a statement from the foreign ministry said. “We believe that the rule of law and the democratic process must be upheld. We are monitoring the situation closely.”

The NLD won November’s elections by a landslide, but the military has been waging a months-long campaign to discredit the outcome, despite no firm evidence of wrongdoing.

The Supreme Court is currently considering its claims, but the situation escalated last week when Min Aung Hlaing threatened to abolish the constitution. On Saturday, the military, also known as the Tatmadaw, appeared to backtrack saying media had taken the general’s comments out of context.

“The Tatmadaw will defend the 2008 Constitution and only act within the boundary of existing laws,” it said.

“The people of Myanmar had their say in November’s vote, and overwhelmingly sent the message that they reject army rule,” said Charles Santiago, the chair of ASEAN Parliamentarians for Human Rights and a Malaysian MP. “The military must respect the will of the people and allow parliament to proceed.”

Santiago urged the Association of Southeast Asian Nations, of which Myanmar is a member, to “immediately use all its diplomatic power to de-escalate the situation and allow democracy to prevail.”

Singapore’s Foreign Ministry expressed “grave concern” at events and urged all parties to exercise restraint and work towards a positive and peaceful outcome. Thailand, Cambodia and the Philippines all shied away from criticism saying the military takeover was Myanmar’s internal affair. All four countries are members of ASEAN.

Amid the rising political uncertainty, people in Yangon, the country’s biggest city and commercial capital, had begun flying the NLD’s red flag from their balconies in solidarity with the governing party, while banners had also been erected in the streets declaring support for the elected government. 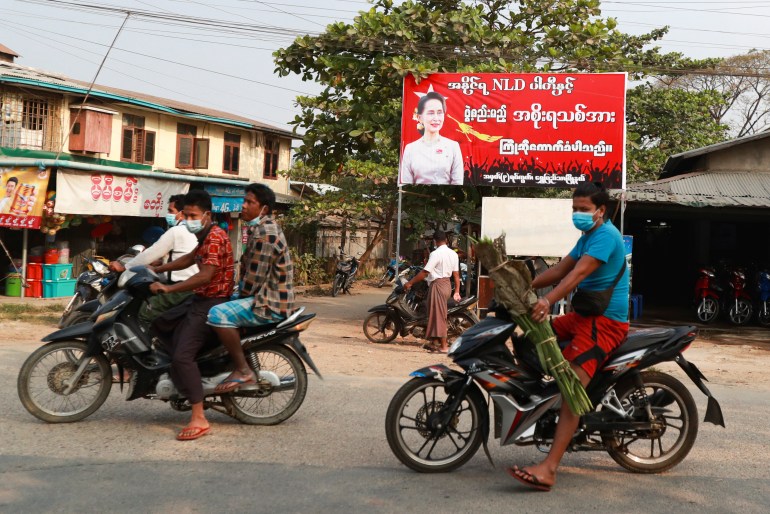 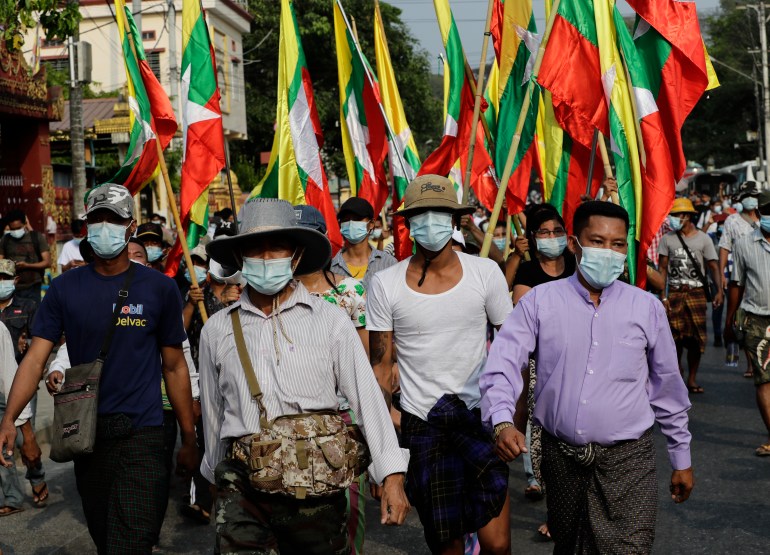 On the streets many places were closed but street markets were packed with people buying supplies like rice, eggs, and vegetables. The city remained relatively quiet and calm, but many were alarmed by the developments.

A 25-year-old woman who works at a packing company declined to be named said the network disruption meant she was unable to contact her family in eastern Shan State.

“I’m very worried about my family and I cannot even go back to my hometown [because of COVID restrictions],” she said.

“This is not good, I’m worried about what it will mean. Things will get bad. People will probably protest and I honestly don’t know what will happen next.”

The last week has been marked by rival protests in support of the NLD and the armed forces.

“It’s at a critical juncture,” said Damien Kingsbury, a Myanmar expert at Deakin University in Australia. “It’s either the end of military involvement in Myanmar politics or it’s a coup. There’s no middle ground on this. This is crunch time.”

Myanmar, once a British colony, was led by the military for decades before it began a transition to democracy in 2008.

Aung San Suu Kyi is the only daughter of national independence hero Aung San, and spent years under the house arrest during the military regime.