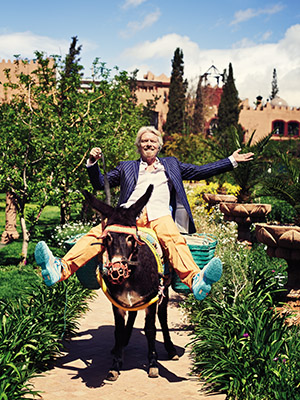 It’s a few minutes before lunchtime at Kasbah Tamadot in Morocco’s Atlas Mountains, and Richard Branson is about to leap into a turquoise infinity pool, fully clothed. He curls his toes around the edge, counts to three and jumps—making sure to offer a huge grin and two thumbs-up signs—before plunging feet-first into the water.

“It’s warmer than I expected!” he says upon surfacing. “Warmer than the Irish Sea?” I ask, referring to his 1987 dunking off the coast of Northern Ireland, shortly after Per Lindstrand and he became the first team to cross the Atlantic in a hot-air balloon. He nods.

Branson has plenty of reason to be mirthful: He’s on vacation at Kasbah Tamadot, his very own Moroccan hideaway. Behind him, a grand staircase leads to the sprawling adobe-coloured main building where he’s played host to many friends, including Mick Jagger, Annie Lennox, Peter Gabriel and any civilian willing to spend up to $3,000 per night for one of the compound’s 27 rooms.

In front of him loom the snow-capped Atlas Mountains, providing a stark contrast from the sepia scrubland below— and a constant reminder of Branson’s aerial adventures. Several years ago, he nearly plummeted to his death on those very peaks during an ill-fated balloon trip around the world launched from nearby Marrakech. As the cool night air replaced the Moroccan sunshine during Branson’s first day afloat, the helium in his balloon contracted more rapidly than expected, sending him and two compatriots hurtling toward the Earth from 30,000 feet. 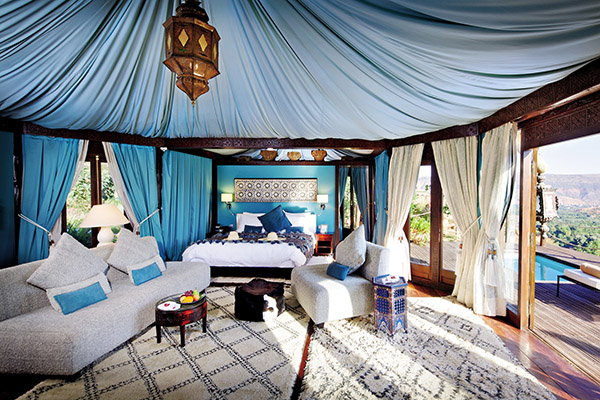 Moroccan chic: Most of Kasbah Tamadot’s berber tent guestrooms come with a private jacuzzi and a view of the Atlas Mountains

As they fired their burners in vain, plunging at a rate of 2,000 feet per minute, Branson considered leaping into the blackness and attempting to land via parachute. But the rocky, uninhabited ground rushing toward him offered scant chance of survival. So his crew and he tried to dump as much weight over the side as possible to slow their fall.

“We just started chucking everything we had out of the door,” Branson recalls. “Suitcases, chairs, our clothes. And we had a bag full of money that we threw out. We managed to stop just in time, so it was worth losing a bit of money on that occasion.”

They were able to stabilise the balloon at 2,000 feet and stay afloat through the night, enduring a bumpy landing the following morning—in the middle of the Sahara. A squadron of heavily armed Algerian soldiers found Branson and his team and brought them to a local warlord.

“It was the most sort-of-luxurious kidnapping ever,” Branson says. “[The warlord] would be roasting lambs and killing cattle. Day by day, we tried to make it clear that we would love to go home. Finally we managed to get word to the president of Algeria, who sent a helicopter to rescue us.”

Kasbah Tamadot is a 45-minute jeep ride from Marrakech (a quarter of an hour by helicopter, though Sir Richard prefers to travel by car). Upon my arrival on Easter Sunday, Branson was one of the first people I encountered. He broke into a big grin, waved me down a corridor and opened a door that led to an indoor pool. “Show him the sauna, will you?” he asked an attendant before rushing off to get some work done. 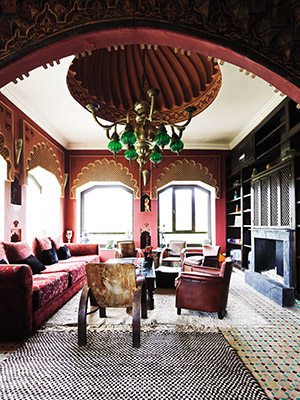 “I personally never work out of an office,” he added. “So I always like to work out of beautiful places.”

Tamadot certainly fits that description. Branson purchased the property in 1998 at the insistence of his parents, who were staying in the country to be with their son as he prepared for his around-the-world expedition. (“The best place in the world to launch balloons from is Morocco,” he says. “The weather conditions are perfect, and the jet stream goes right over the top.”) On a somewhat more casual ballooning trip of their own, they soared over what is now Kasbah Tamadot and immediately saw its potential.

After landing, the Bransons drove back to the old riad—a local variant on the mansion, built around an interior courtyard with fountains overlooked by terraces, this one originally lived in by a colonial French governor—and knocked on the front door. They found it was inhabited by antique dealer Luciano Tempo, who invited them in for a cup of coffee. When Branson returned from his trip, his parents approached him with an ultimatum.

“They said unless I bought it and turned it into the most beautiful hotel in the world, they would disown me,” he says. “And, loving my parents, I decided that I’d better come up and have a look. And I, too, fell in love with it. That was one of the positive things that came out of my desire to push myself to the limits.”

He paid about $1.5 million for the riad, receiving Tempo’s warehouse of antiques in the nearby town of Asni as a bonus. “At that point, Tamadot was still a wonderful folly in the mountains, not yet the hotel it is today,” says Branson’s sister Vanessa. 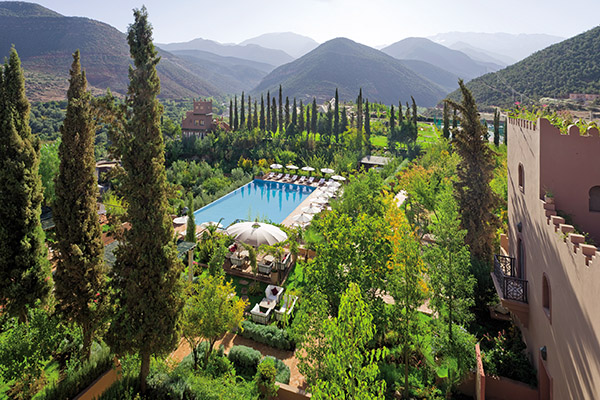 Over the course of seven years, he poured several times his initial investment into expanding the property and hiring and training local staff. Branson’s Virgin Unite and his mother’s Eve Branson Foundation have helped support nearby communities, building a carpet workshop and a craft house operated by locals; all items sold in Tamadot are made in Morocco.

As for the Kasbah, Branson added the same sort of luxurious touches that characterise his other exotic homes that double as boutique hotels, including Necker Island in the British Virgin Islands and the Ulusaba Private Game Reserve in South Africa. At Tamadot, flourishes include rose petals scattered throughout guestrooms daily, a never-ending supply of fresh fruit accompanied by a free minibar and soothing Moroccan music spilling from a Bose sound system in every room.

There are also big-ticket amenities: A heated cliff-side infinity pool, an on-site restaurant called Kanoun that features a mix of traditional Berber fare and international favourites, and a recreation area complete with tennis courts, a ping-pong table and a small amphitheatre. Says general manager Vincent Padioleau: “Nobody has complained that we don’t have TVs.” 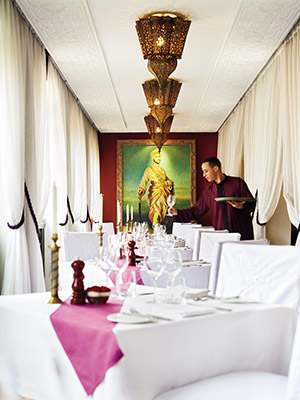 Many of Branson’s guests share his enthusiasm for ballooning, including Peter Gabriel. On one trip, the billionaire and the rocker soared over mountain villages and watched as local children who’d never before seen a dirigible chased after them below. On another, they spied a pair of young lovers atop a haystack; sensing an opportunity for mischief, they silently floated down until they were only a few yards away, then fired the burners and soared off. Says Branson: “I’ve never seen two people jump more!”

Branson also uses Tamadot as a setting for more serious affairs. Gabriel and he are part of an advisory council to The Elders, an elite group of world-fixers founded by Nelson Mandela. Now chaired by Kofi Annan, the rotating cast of 12 has included former US President Jimmy Carter, former Mexican President Ernesto Zedillo and Archbishop Desmond Tutu.

Several years ago, Branson hosted the group at Kasbah Tamadot for a few days as they attempted to come up with a solution for an insurrection brewing in Kenya. He was surprised to find that Tutu, known for his courageous anti-apartheid activism and subsequent problem-solving on the global stage, also has quite a sense of humour.

“People always accuse me of name dropping,” said Tutu. “It’s funny: Only last week, I was at Buckingham Palace, and the Queen said to me, ‘Arch, why are you always name dropping?’” 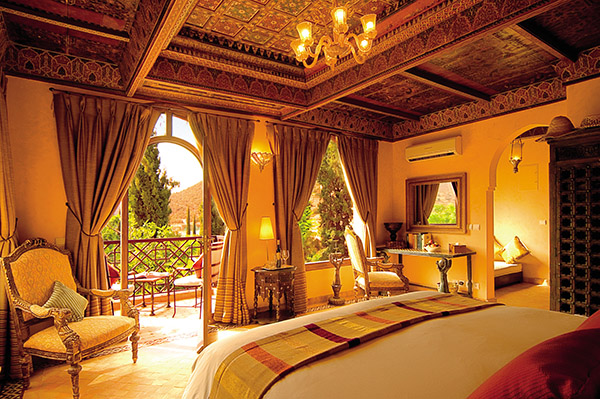 On another occasion, shortly after Ugandan authorities had declared homosexuality—and failing to report homosexual activity—punishable by life in prison, Tutu brought just the right amount of levity to a decidedly serious topic. After condemning the move, he declared, “If I go to heaven, and I find God is a homophobe, I’m going to ask Him to send me to the other place.”

Branson admits he often enjoys group gatherings of a less salacious variety at Tamadot, where twice a week dinner is held at one massive table so that all guests can get to know one another. 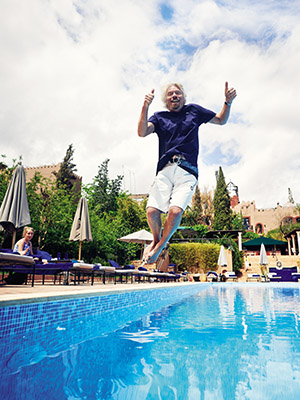 While at Tamadot, which he tries to visit at least twice a year, Branson frequently mingles with guests (by the pool, at meals, near the gift shop and in a couple of the property’s numerous nooks that sport tables, chairs and stupendous mountain views). With a fortune of $5 billion, he could easily afford to block off the property for himself and his family, but the thought of eliminating the possibility of meeting new people does not appeal to him. “I love people, and fortunately my wife loves people as well,” he says. “I think life is all about meeting people. If you own a place like the Kasbah Tamadot, you know it’s important to say hello to the guests, it’s important that you shake hands, and it’s important that you ask questions. I think that’s what makes it an exceptional place over an average place.”

Now a half-century into his entrepreneurial career, Branson has planted the Virgin flag on industries as diverse as music, air travel, railways, banking, beverages and books. And even on vacation, he can’t stop himself from talking about his next venture, Virgin Galactic. After numerous delays, it appears the company is nearly ready to start launching space tourists into the heavens—800 of them, including Lady Gaga, Ashton Kutcher and the Winklevoss twins (who reportedly paid for their $250,000 tickets in Bitcoin). Branson believes the business will be up and running by January.

“It’s been tougher than we thought,” he says. “But the rocket is now tested for the full duration that is needed to take it to space and it’s done a number of tests on the ground. By autumn, I hope to have gone to space.” 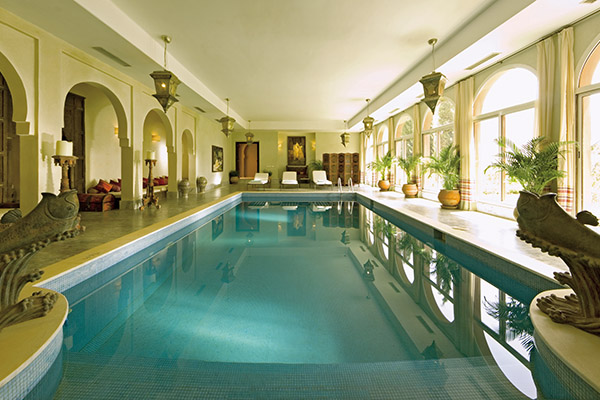 Who wants to be a thrillionaire? “In places like Kasbah Tamadot, it’s important to say hello to the guests,” says Branson


For now, Branson will have to be content with the elevation at Kasbah Tamadot, a mere 4,300 feet above sea level. It’s shaping up to be another delectable day, with the mountain air just dry enough to make the blazing sun tolerable. From somewhere beyond the

tennis courts, one of Branson’s four mules—Peppermint, Parmesean, Paprika and Peanut—lets out an emphatic bray (the menagerie, which also includes three donkeys and two camels, is at the disposal of any guest looking for a short local trek).

Branson’s shirt, meanwhile, has barely begun to dry. He looks back toward the pool. Then, as though attempting to underscore the fact that he’s still up for any sort of flight, no matter how short, he scoots back toward the edge of the water and glances over.

“Once more for good luck?”

Check out this album for more pictures: Richard Branson in Morocco